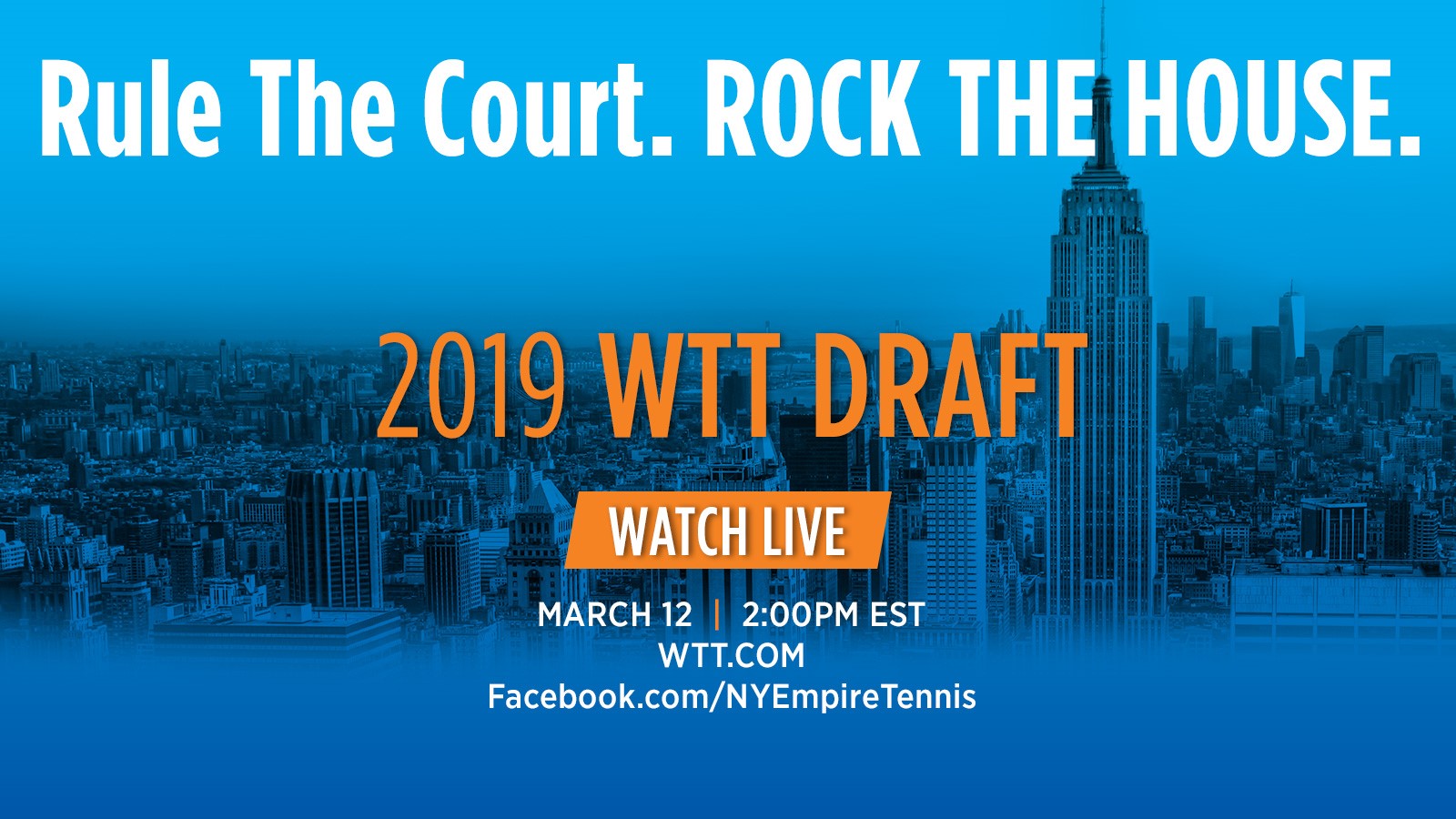 The New York Empire presented by Citi and head coach Luke Jensen today announced its player roster and new venue for the upcoming 2019 World TeamTennis (WTT) season. The fourth-year WTT franchise will play its home matches at Cary Leeds Center for Tennis & Learning, a world-class facility in the Bronx, and the flagship home to New York Junior Tennis & Learning (NYJTL).

At Tuesday’s WTT draft in Indian Wells, Calif., the Empire protected 6-foot-10 ace specialist, John Isner. The 2018 Wimbledon semifinalist will play his eighth season of WTT and third with the Empire. He’s currently the No. 9 ranked player in the world and is second all-time in aces served on any surface.

Holding the first pick of this season’s WTT draft, the Empire chose Kirsten Flipkens, from Belgium, who will make her return to the Empire roster after sitting out the 2018 WTT season. Flipkens, a former World No. 13 and Wimbledon semifinalist, is no stranger to team tennis as she’s played a remarkable 16 years of Fed Cup action for her native country. This will be her second season playing in WTT.

With the Empire’s second-round pick, the team selected 20-year-old American Ulises Blanch. A former world No. 2 ranked junior, Blanch won his first career ATP Challenger Tour title in Perugia, Italy in 2018, not dropping a single set en route to victory. The 6’3” Blanch, who was a semifinalist in Boys’ Singles at Wimbledon in 2016, will bring a fresh, youthful look to the Empire’s men’s singles position.

Neal Skupski, the current No. 34 ranked doubles player, is returning to the Empire for his fourth consecutive season and will again serve as the team’s doubles specialist. In 2018, Skupski played 110 games of men’s doubles and 114 games of mixed doubles, serving up 26 aces along the way.

WTA Tour veteran, Maria Jose Martinez Sanchez, achieved a career-high doubles ranking of No. 4 in the world in 2010 and has won 18 tour doubles titles and five in singles. After being named WTT’s Female Rookie of the Year in 2018, Martinez Sanchez returns as a member of the team’s successful mixed doubles pairing with Skupski.

“We wanted to pick a team of players who could play in this format, which is fast, furious and pressure- packed,” said Jensen. “We wanted to protect our veteran players and we did that with Flip. When you get the highest ranked WTA player available, you’ve got an anchor. To fill the rest of the roster with successful, veteran tour players and then to go young with Ulises is just really exciting. He’s got a lot of firepower and he will learn from our other veteran players.”

With both new and familiar faces on the roster, the Empire is moving to a new home this summer. In June 2015, the $26.5 million Cary Leeds Center for Tennis & Learning opened its doors in the heart of the Bronx. The Cary Leeds Center provides more than 6,000 hours of free tennis court time annually to

the community’s under resourced youth. Last year more than 15,000 players walked through its doors for play and programming.

“We are delighted to work with New York Empire of WTT to provide aspirational experiences for our juniors, bring in a dynamic event for the community to enjoy and utilize the world-class Victor Kiam Stadium at the Cary Leeds Center,” said George Guimaraes, NYJTL CEO & President.

The New York Empire will kick off the 2019 schedule with five home matches during the season’s first eight days, hosting the San Diego Aviators on opening day, Sunday, July 14. The Empire face expansion franchise, the Vegas Rollers, on July 16 ahead of the Orange County (Calif.) Breakers on July 18 and Washington (D.C.) Kastles on July 19. The first homestand comes to a close on July 21 against the second of two new WTT teams, the Orlando Storm.

The Empire’s home slate closes out with matches on Monday, July 29 against the Springfield (Mo.) Lasers and Tuesday, July 30 when the Philadelphia Freedoms visit.

It promises to be an animated affair when the Empire face the Washington Kastles during a home-and- home match series on Friday, July 20 and Saturday, July 21 as New York Head Coach Luke Jensen will face his brother, Murphy, the longtime coach of the Kastles. During their playing days, the Jensens displayed their popular brand of “Rock and Roll Tennis” on their way to a world No. 6 ranking and multiple ATP doubles titles.

New York Empire tickets will start as low as $10 for children age 16-and-under, and $25 for adults. The New York Empire offers both reserved box seats and general admission seating, along with hospitality packages, which include food and beverage service. A limited number of VIP tables are also available.

The New York Empire presented by Citi competes in the World TeamTennis League. WTT is in its 44th season as the innovative leader in professional team tennis competition. Team matches consist of five sets, with one set each of men’s and women’s singles, men’s and women’s doubles, and mixed doubles. One point is awarded for each game won and overall match scoring is cumulative. The Presenting Sponsor of the New York Empire is Citi. Official Sponsors include Bloomberg, Empire BlueCross BlueShield HealthPlus, Deborah Slaner Larkin, NYU Langone Health and USTA Eastern.

Citi, the leading global bank, has approximately 200 million customer accounts and does business in more than 160 countries and jurisdictions. Citi provides consumers, corporations, governments and institutions with a broad range of financial products and services, including consumer banking and credit, corporate and investment banking, securities brokerage, transaction services, and wealth management.

The mission of New York Junior Tennis & Learning is to develop the character of young people through tennis and education for a lifetime of success on and off the court. Since 1971, NYJTL has changed lives through tennis, education, healthy living, and character development programs. Today, it is the largest youth tennis and education non-profit in the nation, reaching more than 85,000 K-12 New York City youth.

NYJTL celebrates the diversity of the children who participate in every program, providing 3,000,000 hours of year-round programming that serves youth from all five boroughs. During the critical summer months, NYJTL operates in 39 community tennis sites. All NYJTL Community Tennis and Afterschool programs are offered at no cost to its participants.