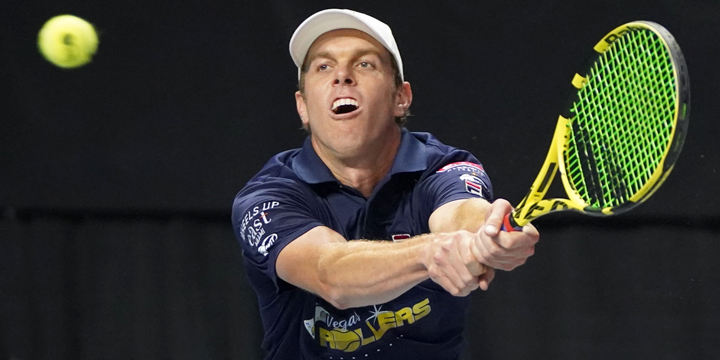 LAS VEGAS – The Vegas Rollers achieved another franchise first Tuesday night, as they won their first home match with a 24-20 victory over the New York Empire inside Orleans Arena.

Sam Querrey, the 39th-ranked men’s player in the world, was part of three winning sets to help the Rollers improve to 3-5 in front of an energized crowd of 953 fans, while climbing into playoff contention with the postseason a little more than a week away.

Querrey won sets in mixed doubles, men’s doubles and men’s singles to help the Rollers bounce back from consecutive home losses over the weekend, and move one game behind San Diego and the Empire in the standings.

“Not only did we lose those ones, they were both so close, a couple games here and there; it was a good job from the team to bounce back because it did take the wind out of our sails a little bit to use those two big marquee matches on the weekend,” Querrey said. “Hopefully we can finish the season on a high note and win out from here and make the playoffs.”

New York had its three-match win streak come to an abrupt halt and dropped to 4-4 on the year. The Empire is now tied for third place in the league with San Diego, which was idle.

Querrey and Harriet Dart teamed up to open the match with a 5-3 win over New York’s Maria Jose Martinez Sanchez and Neal Skupski. With the Empire trailing 4-3, and the game tied 40-40, Martinez-Sanchez was called for a very rare foot fault on her second serve to give Vegas the set.

After losing their 11th straight game at home, Dart and Asia Muhammad turned up the heat in their women’s doubles match and won three straight games to build confidence, and eventually earn the set with a 5-4 victory after taking the set-tiebreak, 5-3, over Martinez Sanchez and Kirsten Flipkens, the 2013 Wimbledon semifinalist who climbed to 13th in the world that year.

Dart and Muhammad were shutout over the weekend, losing 5-0 to both defending champion Springfield and last year’s runner-up Philadelphia, but responded well and extended Vegas’ overall lead to 10-7.

“They had some troubles over the weekend and the fact that they came back out today and not only got more games, but won, is great for their confidence, great for the team and that’s really hard to do,” Querrey said. “Kudos to them for bouncing back after a tough weekend because that’s hard to do.”

Men’s doubles also went to a set-tiebreak after Querrey and Matt Reid and New York’s Neal Skupski and Ulises Blanch each held serve over the first eight games. Querrey and Reid seized the momentum during the tiebreak, though, and dominated (5-2) to win the set, 5-4.

Dart, who made it to the third round of Wimbledon this year and whose highest ranking came earlier this year, at 121st, held her own against Flipkens until an injury to her right foot forced a substitution. Muhammad came in with the set tied 2-2 and held serve with Dart to force the third straight set-tiebreak of the night. Dart proved to be overpowering and gave the Empire their first set of the night, and closed Vegas’ lead to 19-16.

Querrey closed the match with 5-4 win over Blanch in men’s singles, the fourth straight set that went to a tiebreak.

New York coach Luke Jensen said he believes Vegas has the tenacity to make a run to the playoffs, after enduring a tough start to the campaign – that being five straight on the road – and then opening the home portion of their schedule against last year’s finalists, Springfield and Philadelphia.

“I always look at championship caliber as how they deal with adversity,” Jensen said. “Women’s singles, Dart goes down, Asia comes in. This is her town; I mean she grew up here. She has so much family (and) friends and history, so there’s a lot of pressure on her and she shined.

“I really thought from start to finish, anything that they faced, anything that we threw at them, they had answers for … to come in here with so much expectation after being kind of road weary for a little while, I thought it was extraordinary how they came out with their backs against the wall. They had to win tonight to be in the race.”

Blenkiron said Sunday he had full confidence in his women’s tandem of Muhammad and Dart, despite them being shutout in the Rollers’ first two home matches in franchise history. Blenkiron said he had no plans of tweaking the lineup – though he had no choice to stick with the duo after Monica Puig shifted her focus on the Citi Open in Washington D.C. while preparing for the US Open – and that’s he’d simply work with them on a few things during Monday’s practice. The pair – particularly Muhammad – looked like a different team Tuesday, playing with a wealth of confidence, finding the right spots, and hitting the ball with a different authority to earn the set.

“I was pretty disappointed over the weekend, didn’t feel like I helped the team out that much, that kind of hurt,” Muhammad said. “I just wanted to come out and do my best and make sure I turned it around tonight. I knew I had so much better to offer, especially in front of my hometown.”

After spending the day at Mountain West Media Day, UNLV football coach Tony Sanchez took in his first Rollers match. “I thought the whole thing was cool, that was fun,” Sanchez said via text message.

After enjoying a night off, the Rollers host the Orange City Breakers in a state-border rivalry on Thursday at 10 p.m.ET/7 pm PT. It is the first of a home-and-home matchup that will see the teams play in Southern California on Saturday. Follow results on WTT.com/schedule or VegasRollersTennis.com. Thursday’s match will be broadcast on CBS Sports Network.

The Empire head to Southern California to meet the Orange City Breakers on Wednesday at 9 p.m.ET/6 p.m. PT Breakers Stadium at Palisades Tennis Club. The Breakers went into New York and won the first meeting, 22-15, on July 18. Follow results on WTT.com/schedule or NYEmpireTennis.com. The match will be broadcast on ESPN+.