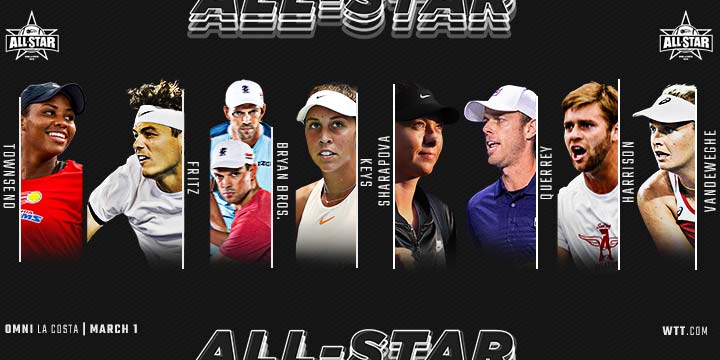 RANCHO SANTA FE, Calif. (December 9, 2019) – Building on a pulsating 2019 World TeamTennis season in which its champion was decided on the last point of the WTT Final, WTT is serving up a new twist for its 45th season with a spectacular All-Star event featuring many of the best American tennis players.

World TeamTennis will showcase much of its top talent from its 2019 season and soon-to-be-announced celebrities from the tennis and entertainment industries when it introduces the “WTT Celebrity All-Star Match” – a pro-am tennis event on March 1, 2020 at Omni La Costa Resort & Spa (home of WTT’s San Diego Aviators) in Carlsbad, Calif. Tickets are on sale now at WTTTickets.com. Limited seating is available for the WTT Celebrity All-Star Match, and the event is expected to sell out.

“Playing in San Diego for the Aviators is something that I make sure is on my calendar every summer, and when I was asked to participate in the 2020 WTT Celebrity All-Star Match in San Diego, it was a no brainer for me,” Vandeweghe said. “The March 1 match should be awesome for the players and the fans. Team tennis is always the most fun and exciting. I love the format and the excitement that every point counts is something that we don’t get on the tour, so I love every opportunity to play WTT. It’s always a major plus to be able to sleep in my own bed as well in San Diego.”

“Our WTT Celebrity All-Star Match, featuring many of the best Americans in tennis and popular WTT stars, will extend our positive momentum from the 2019 season into what will be an even bigger year for WTT in 2020,” WTT CEO Carlos Silva said. “The commitments we’ve received from many of WTT’s stars to participate in the WTT Celebrity All-Star Match make it evident that our players love our team tennis format.”

Fritz, the 22-year-old rising star who won his first ATP singles title in June’s Wimbledon tune-up at Eastbourne and is a three-time finalist on the 2019 ATP Tour, and Querrey (owner of 10 ATP singles and five ATP doubles titles) are two of the ATP Tour’s four highest-ranked American players at No. 32 and No. 44, respectively, and headline the WTT Celebrity All-Star Match on the men’s side.

Sharapova, a singles champion at Wimbledon in 2004 as well as the 2006 U.S. Open, 2008 Australian Open and 2012 and 2014 French Open, has played eight World TeamTennis seasons and won WTT titles with the Newport Beach Breakers in 2004 and the Orange County Breakers in 2017.

Keys is a five-time WTA singles champion and 2016 U.S. Olympian currently ranked No. 13 in the world. Keys played for the WTT e 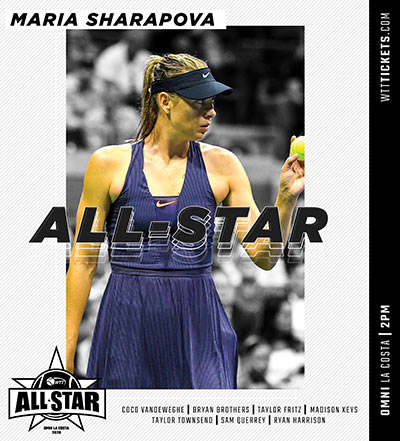 xpansion Orlando Storm in 2019 and has routinely contended for Grand Slam titles in recent years. She was a 2017 U.S. Open singles finalist and, in 2018, reached the semifinals of the French Open and U.S. Open, and the Australian Open quarterfinals.

The Bryan Brothers, tennis’ most accomplished doubles duo who will team on the ATP Tour for one final year in 2020, and Querrey played on WTT’s expansion Vegas Rollers in 2019.

The WTT Playoffs return to Orleans Arena at The Orleans Hotel & Casino in Las Vegas, Nev. for the second consecutive year – home of WTT’s Vegas Rollers – with WTT’s semifinals on July 31 and the WTT Final on Aug. 1. The Springfield Lasers repeated as WTT champions in 2019 as they rallied to complete a 20-19 comeback victory over the New York Empire.

WTT introduced professional team tennis to the world in 1974 and was co-founded by Billie Jean King. WTT is one of five active U.S. pro sports leagues which has been in operation for over 40 years, along with the NFL, NBA, NHL and MLB. For more information on World TeamTennis, please visit WTT.com.